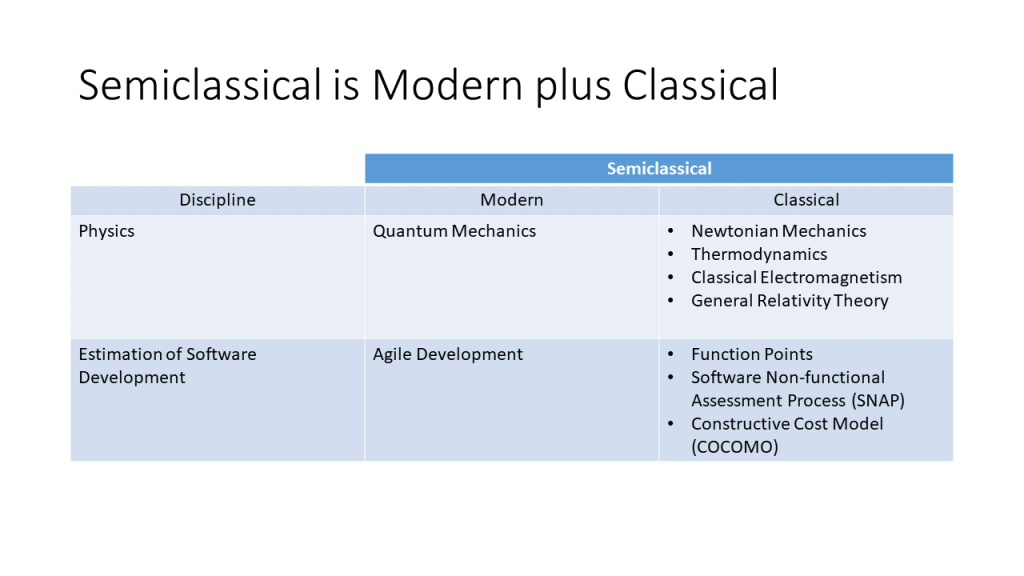 In the beginning of the 20th century, a group of physicists began experimenting with and publishing information about a new approach to physics called Quantum Mechanics. They thought it was a new way of looking at the natural world. It was. Some thought that it would replace the classical approaches that were already in use. It did not. Many problems had to be solved by using elements of Quantum Mechanics as well as classical physics. This approach was called semiclassical physics.

About 100 years later, a group of software developers began experimenting with and publishing information about a new approach to software development called Agile Development. They thought it was a new way of developing software. It was. Some thought that it would replace classical approaches that were already in use. It did not. Estimating agile development is best done by using elements of agile estimating as well as classical software estimating.  This approach is called semiclassical estimating.

There are those who will take some exception to the figure above. Physicists usually consider general relativity to be part of modern physics. They also consider it part of classical physics. By the same token, agile estimators may consider the COCOMO Suite, which contains CORADMO, to be a modern estimating tool. It is also used to predict waterfall development projects. Both quantum physicists and agile estimators must be comfortable with a little uncertainty. Just ask Werner Heisenberg.