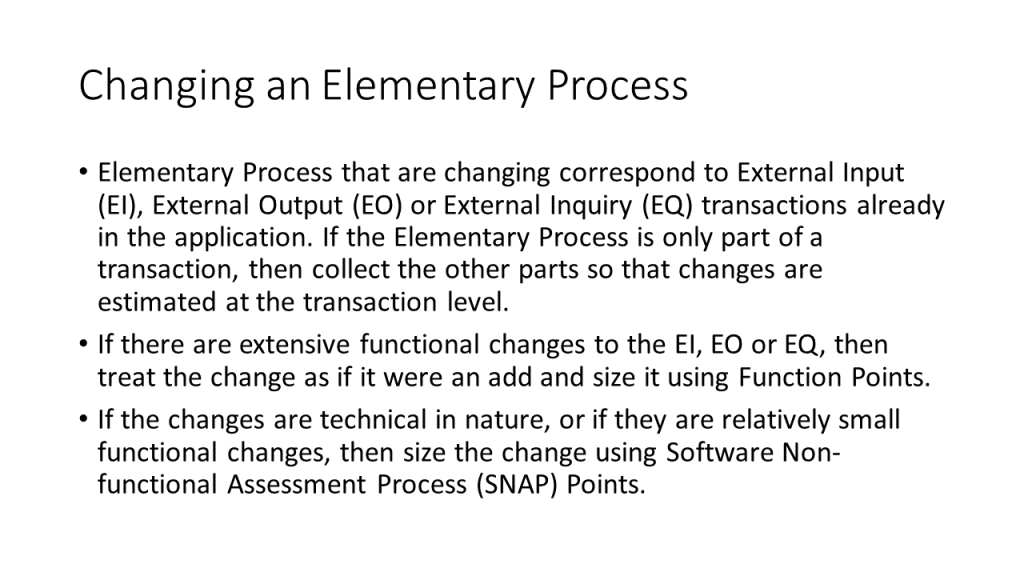 Most of the time, when changing an Elementary Process this does not become an issue. You will have already addressed these situations when you performed the Adding an Elementary Process procedure. However, there are times when this may not have occurred. For example, you might be estimating the second or subsequent release of an application when the first release was done using a different or no estimating approach. Another situation where this could be happening is where you are enhancing an application that was not subjected to any function point analysis. In these cases, you will have to use the principles outline in Adding an Elementary Process to identify the function point transactions in the original application.

Once you have identified the transaction, there is a question of whether the change is a substantial functional one. Agile development teams sometimes use various types of stubbing. They may envision a report that does some type of complex analysis. However, this is going to part of release 3. In release 2, there is a very simple list of a subset of the information. In release 2, this listing could be considered a stub. When release 3 is being estimated, then the report should be estimated as if the team were Adding an Elementary Process. This should be done any time the estimator feels that the team is “going back to the drawing board” to change some functionality. Note that functional changes always alter the information that is crossing the application boundary. When new Data Element Types (DETs) are added or removed, this is a functional change. Changing the way a DET is derived is a functional change, provided that a different value is calculated. Changes to the method of calculation, like to increase performance, is considered technical. 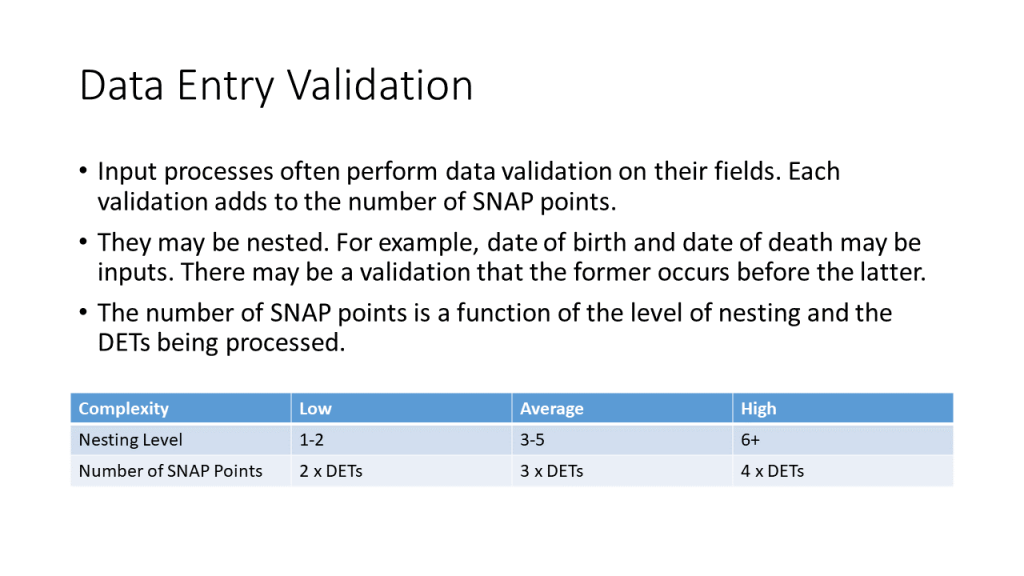 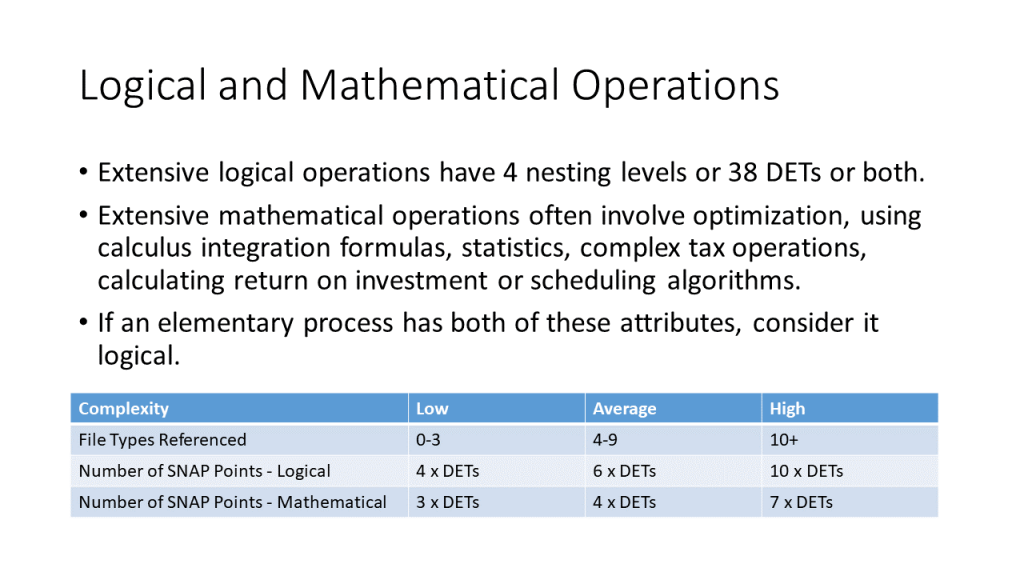 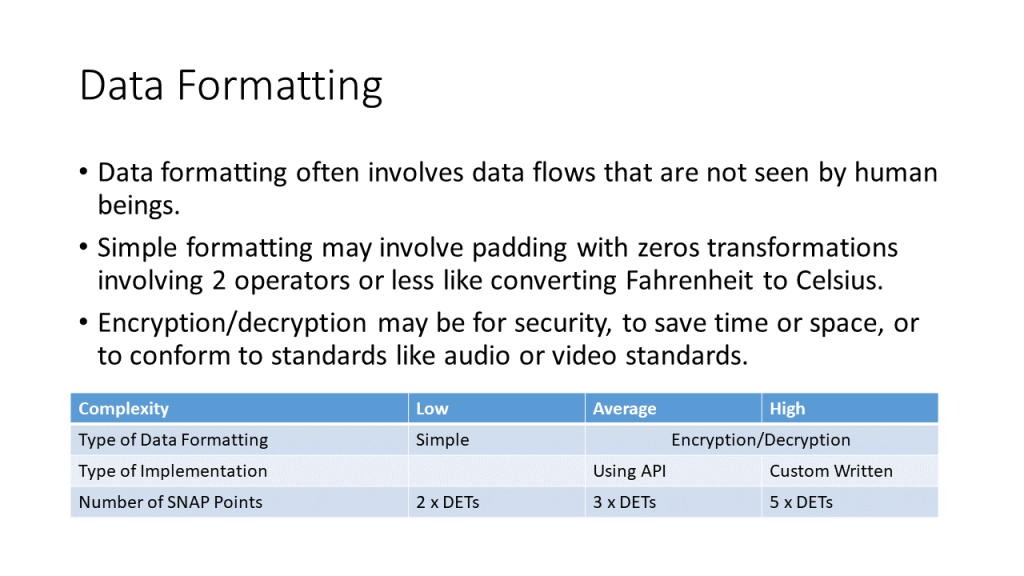 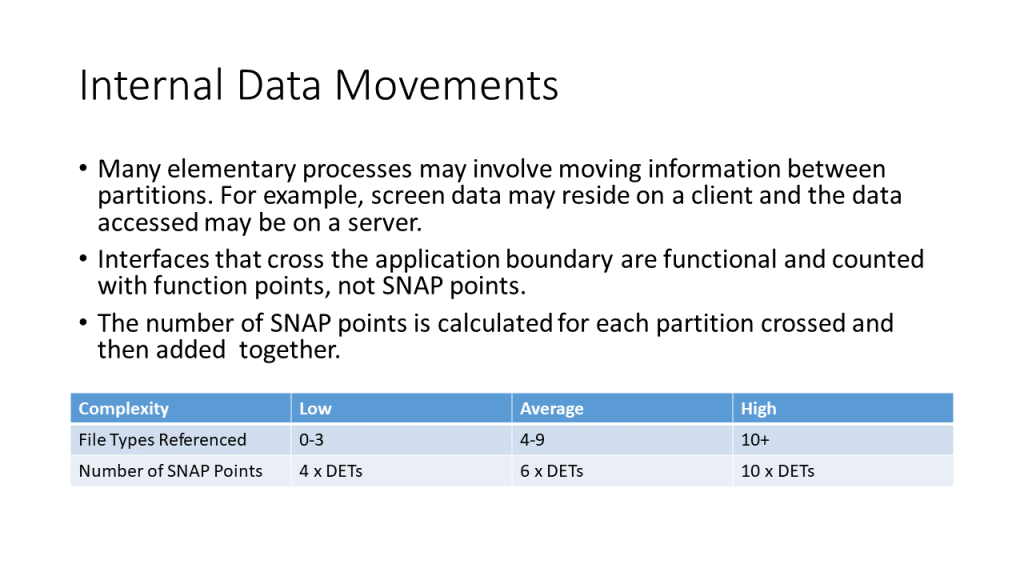 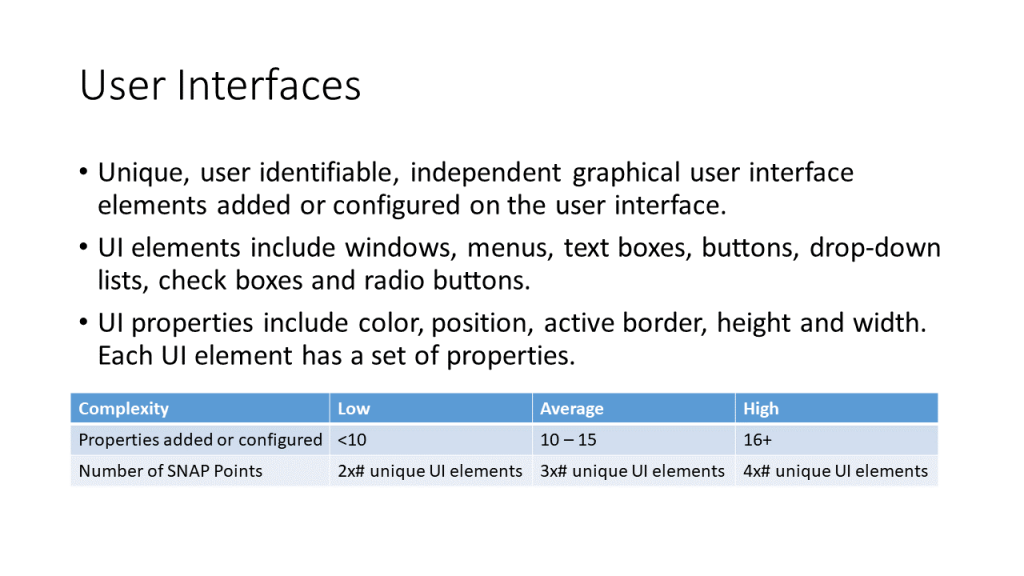 Multiple Output Methods is the flip side of Multiple Input Methods. If the same report can be displayed on a screen or faxed to a client, then it is only one External Output (EO). Adding or changing the fax capability would be a change to that EO and be sized in SNAP points using the matrix below. 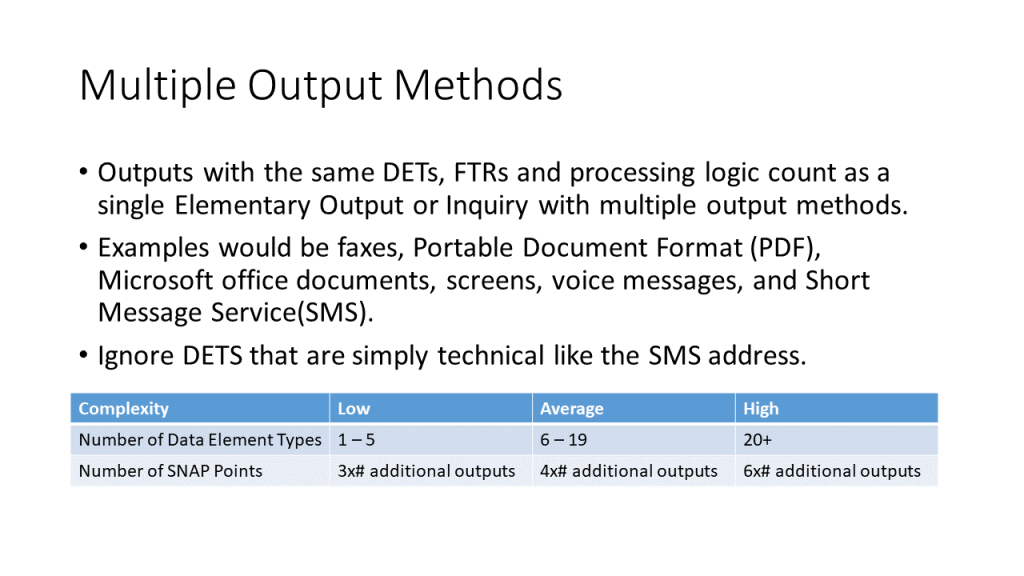 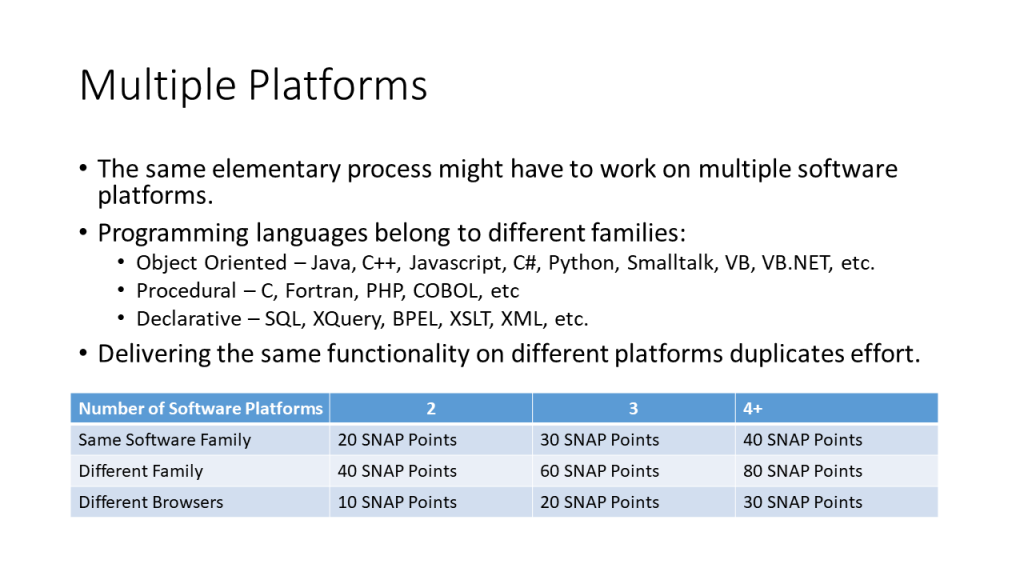 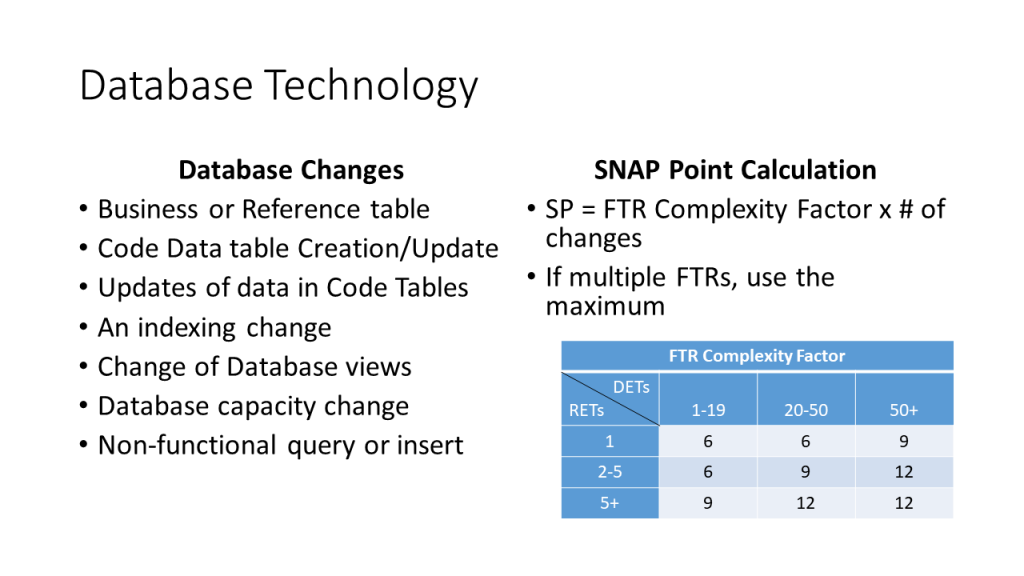 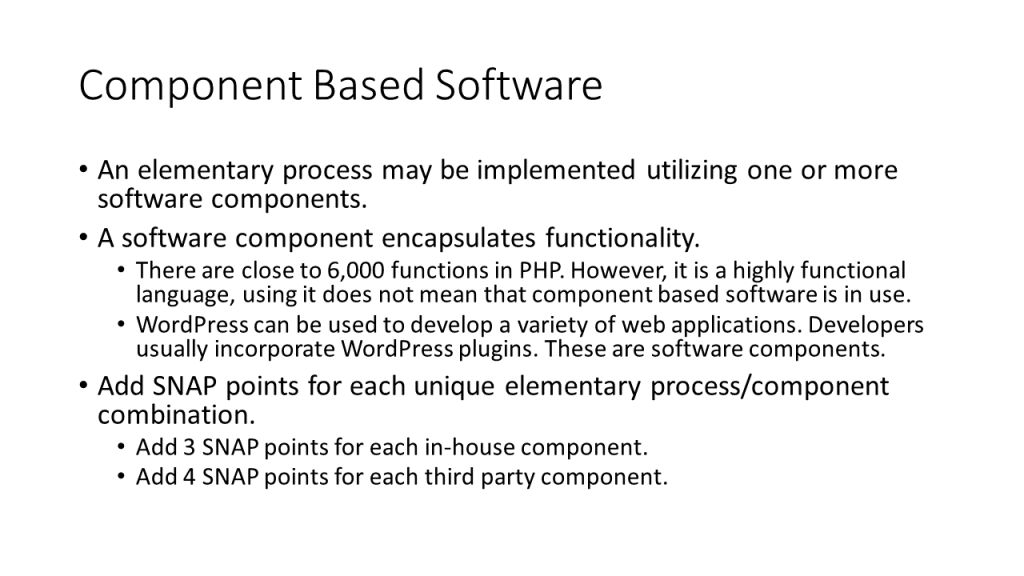 Multiple Input/Output Interfaces come into play when an additional interface is added for an elementary process. Sometimes, this is because of operational changes. For example, if a company has a partnership program with another where they exchange customer information. If the company enters into a similar partnership with another company, then files might be exchanged with the other company. They would be functionally the same, but SNAP points would be counted for the second interface. The number of SNAP points would be based on the number of data element types in the transaction, as well as the number of new transactions. Transactions are sometimes added for performance reasons. 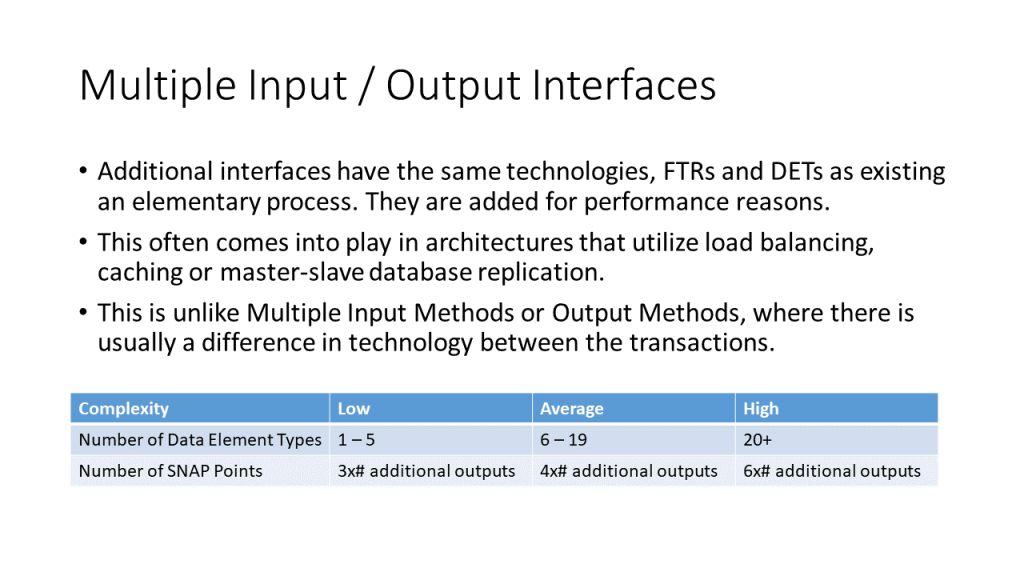