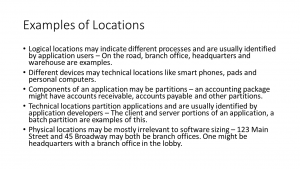 The identification of transactions and data are part of every software sizing exercise. Processes, and sometimes data, are impacted by logical location. For example, the process “Authorize Shipment” might take place at both corporate headquarters and at a warehouse location. In the corporate office, it might involve price and credit checks. In the warehouse, it might involve a weight check. What at first appears to be the same process is actually different depending upon where it is being performed. Likewise, the databases that support these two processes would be different. Therefore, it makes sense to identify the locations before trying to identify the transactions and data. Then, when a
process is identified, decisions can be made whether there are one or more transactions depending upon how they are executed at each location. Something similar can be considered about the structure of a data item at different logical locations.

Locations are logically distinct types of areas where a subset of processes are done. Examples might be “On the Road,” where information is only accessed; “branch offices,” where orders are taken; and “headquarters,” where data is collected. Even when the same process is performed in two locations, it may be done differently. For example, sales in a branch office may always require on-the-spot payment, while sales at headquarters may also allow the customer to make a purchase by issuing a purchase order. Similar data may in fact be different in different logical locations. For example, customer data may consist simply of purchase and payment information in the branch office. At headquarters, customer data may also include credit information.

Locations usually have data storage associated with them. For example, the accounts payable component of an accounting system might be the only place where a vendor file is maintained. Smartphones might have the same data file that a mainframe has, but the smartphone may have less attributes for each record. In addition, the smartphone version of the file might only have the data records that are of interest to that smartphone user.